Rerolling Knights is a 2D Auto Battler, with gameplay inspired by Super Auto Pets and visuals inspired by Patapon. Purchase, position, and evolve your units to create an unstoppable army, besting the competition. Enemy armies you encounter are other armies built by other players in real-time! Get to 10 wins without dying and boast your victory amongst your friends.

Thanks for still playing if you're reading this! We're gonna start developing on the game casually again for a little bit! Sorry for the 6 month break, I was trying to get a job!

I have a suggestion for a max level cleric; maybe like once every 2 battles, there's a 50% (or 25%) chance that the cleric revives a random teammate.

I finally pushed the new update with the Alien changes, sorry for the delay! It's up now on WebGL and soon to be on mobile.

For clarity some health stuff was going on with me, and @DayMan's real job also picked up, so time was a big issue. Also needed a break from working so hard to get this game together in pretty much a month and a half.

We're going to try to have accounts and everything set up for our next big update (so you wont lose data when we make updates) and have team naming and things to add more personalization. After that I want to get a handful of more units in and an unlock system before we make an official release on steam (which will still be free) Thanks for still playing and enjoying the game! We've stayed around 100 plays a day which is crazy! The support is unreal and we cannot thank you enough

Your game is really cool. Have played so many time.

I just see the astronaut is actually bugged, he dont copy the lowest, he copy the most op guy. Some exploit with timetraveller ^^

Hey! I've been playing this game for a while, and I have a few suggestions...

1. Maybe add some sort of summoner? Maybe something that spawns something else when it dies.

3. I think a campaign would be beautiful. Maybe starting out with one or two hero slots and then over time you can hire more heroes, etc. Another thing to come along with this would be boss battles - could be very interesting, especially for an Auto-Battler.

My suggestion is to also add an option to play every game mode in shop mode instead of reroll mode where you just can buy all lvl 1 units and all itmes for different prices in a shop and reroll won't be an option. In this mode the game would be more tactical and non dependant on luck with the rerolled set of items and units. Would like to play this :)

Probably one of my better builds, used Banker for more cash each round, used Poisoner to weaken most units, Necromancer would attack and gain health from the back without being harmed (hopefully) the Card Master is really just a filler, Tamborinist allows the Necromancer to gain +2/+7 each attack instead of just +0/+5, and Donkeys would just strengthen all units from failure. overall I think I could have done better, upgrading my Poisoner into a Monster would have definitely helped, maybe swapping the Card Master and the Tamborinist and then using a Sniper instead of a Card Master could have helped, but I did pretty good this run. 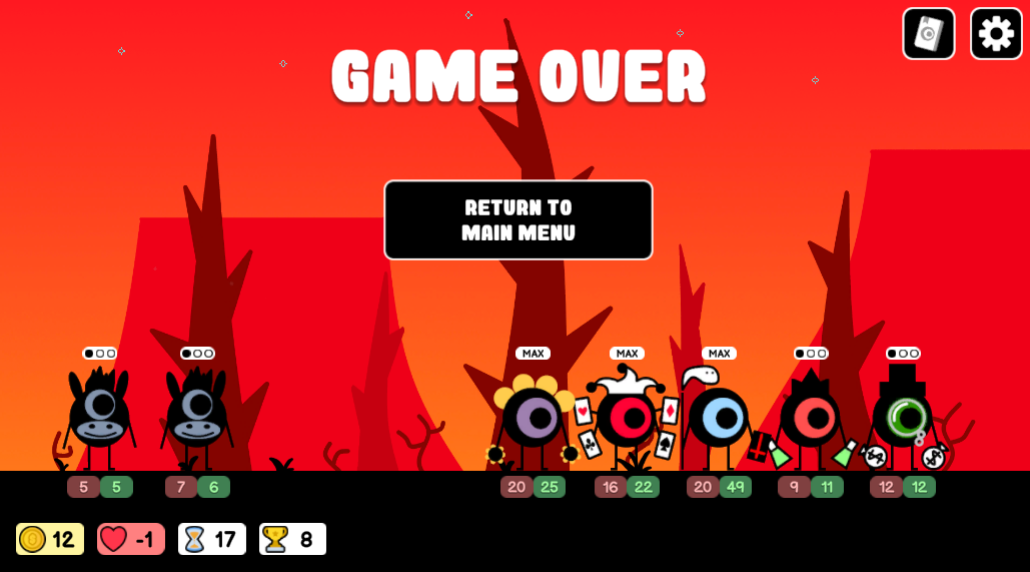 Made another good build, Mush Knight in front to dampen enemies' attacks, A Shield? to dampen the damage Mush Knight takes, Banker obviously for more cash each round, Longbow Man to damage enemies from afar, Tamborinist to increase Mush Knight and Longbow Man's health and attack. Once again, overall good build but could use some tweaks, like maybe using some Healers, or Donkeys / Wheat Farmers to help buff each round.

Edit: I'd like to make a comment about how my Mush Knight got to -1 health, but in the same turn, my Tamborinist revived it to 1 health, but it still died, I don't know if this is intentional, but I just wanted to comment on it because if it isn't intentional, it needs a fix. 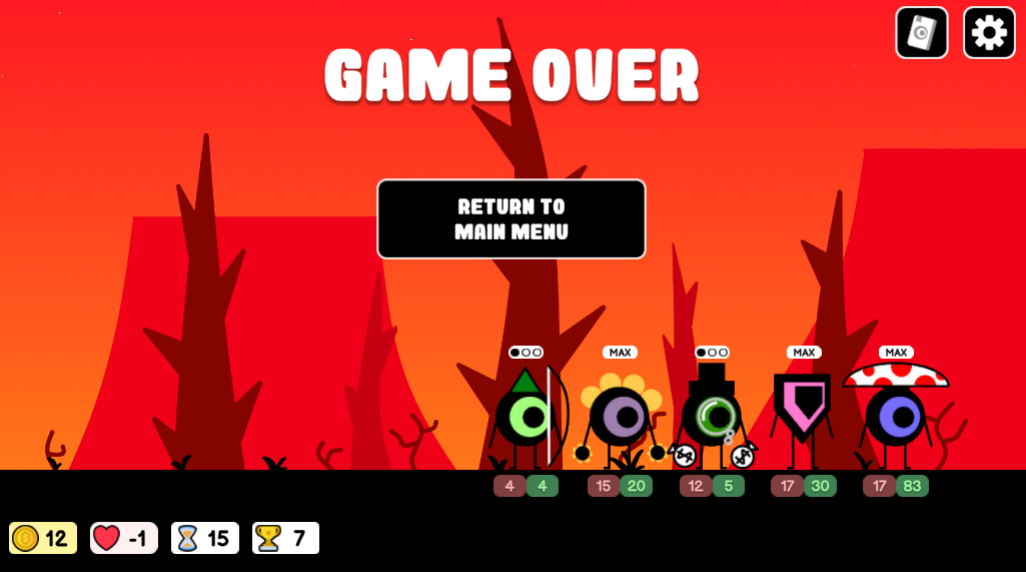 Joker are powerful vs astroshit.

(Sorry for my english)

making PDF on google sheets of the unit pedia, if anyone wants to help the document allows anyone with the link to comment and suggest, so you could comment units, their stats, what they are good with and anything else.

Edit: just realized that is the view only version, here is the editable version:

this contains all units (no astronaut (yet))

3 Sword Style floating text is showing +1/0 or +0/1 for each empty slot when it gains stats, instead of the 3/0,0/3.  It appears it is actually gaining the correct amount, just displaying the bonus wrong.  Also the astronaut line sorta makes the final assassin irrelevant, the assassin kills 1 unit and dies, where as the astronauts effectively remove a unit and gets a ton of stats that you didn't have to invest anything in.

Good catch on the numbers not displaying correctly.

And the astronaut line is being reworked in the next update to not be as strong!

gauntlet is fun if you just pretend astronaut doesnt exist and when it comes you know that alien is going to ruin your entire run. Seriously i cant win gauntlet because of this stupid alien unit just ruining my good units. Solo builds are non existent and balanced teams isnt even enough to counter aliens because they'll always have backup units. And i'm refusing to use astronaut.

one salty monster can ruin your team. :/

everyone seems like they overlook a unit that is immune to ogres, shadows, and piercers it is the aoe buffer the bard. Think About It You Can Buff All Of Your Units In Health To Survive A Ogre Attack, A Shadow Attack, And A Piercer Attack 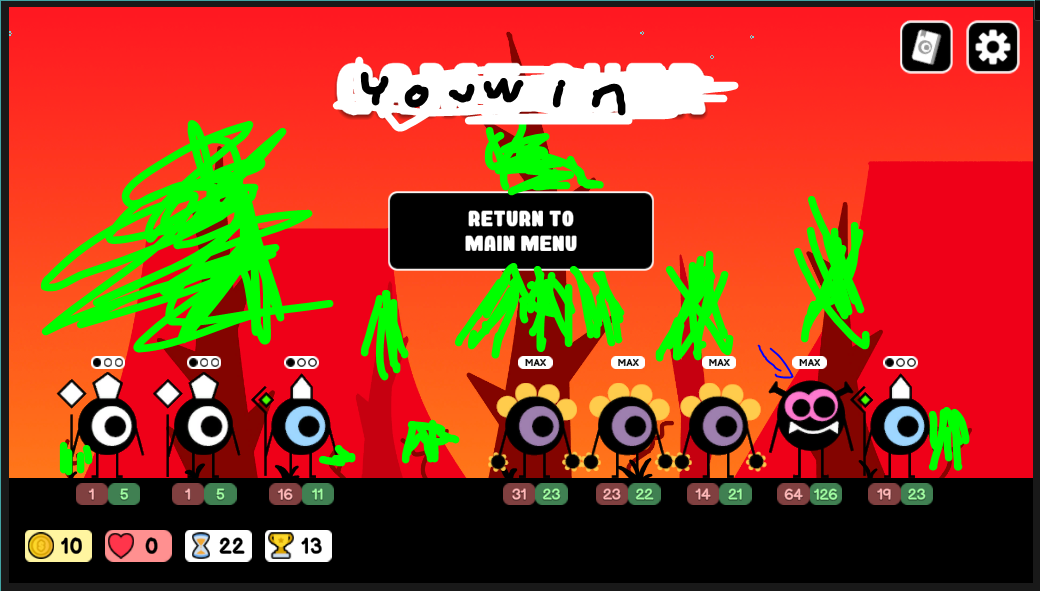 Edit: I Got A "Flawless Run" On Gaunlet 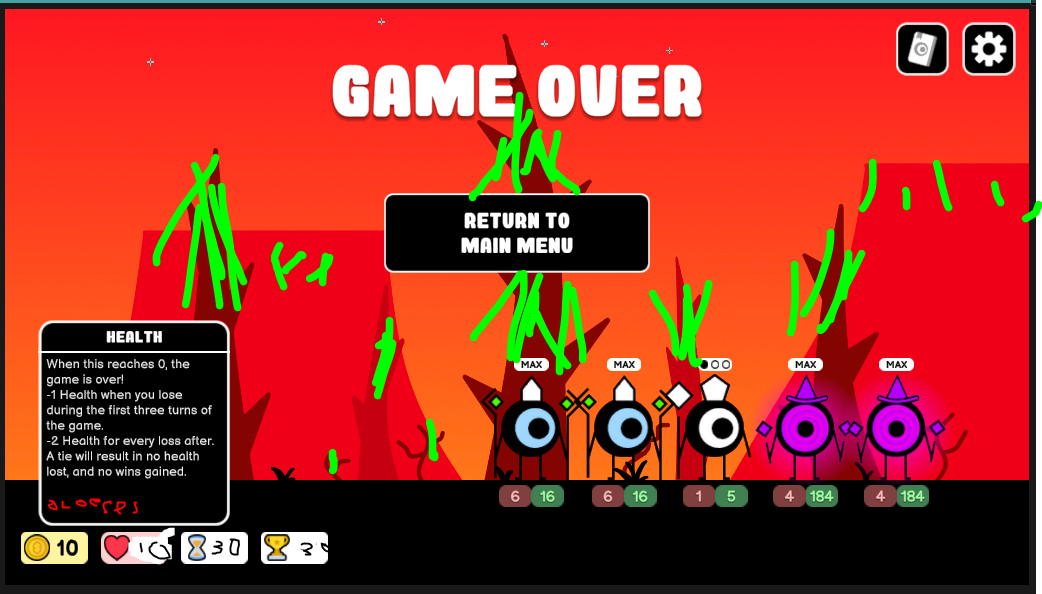 early alien: will give 5/5 to a unit (most teams in the early rounds are weak so you are buffing them)

early spaceman: it will debuff its self since all unit you buy early game will have weaker stats than the spaceman

Yeah, gonna be reworking it this weekend

What do you hate about it?

The left path is just so broken against my type of build. Im kinda just screwed if it took the single only unit im buffing and replaced it with crap stats. Even if I have an even balanced team that just 1 out 5 member just gone and usually i only buff 3 while they'll likely have other backups if the astronaut swaps with one of my weak units. I feel like the left path can be balance with copy instead of swap. The right path is fine i just dont like going against left path. 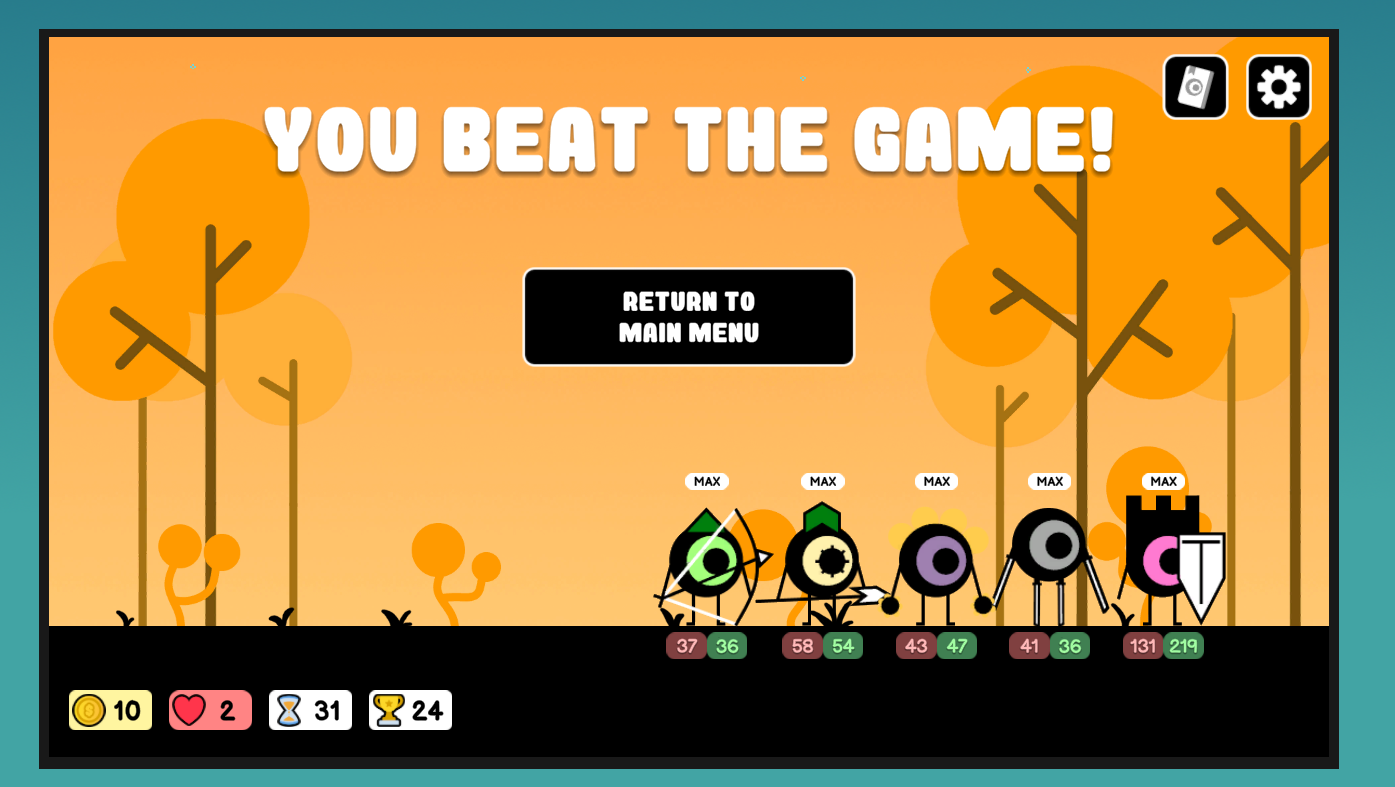 This team worked much better than I expected it to

yooo this strat is op 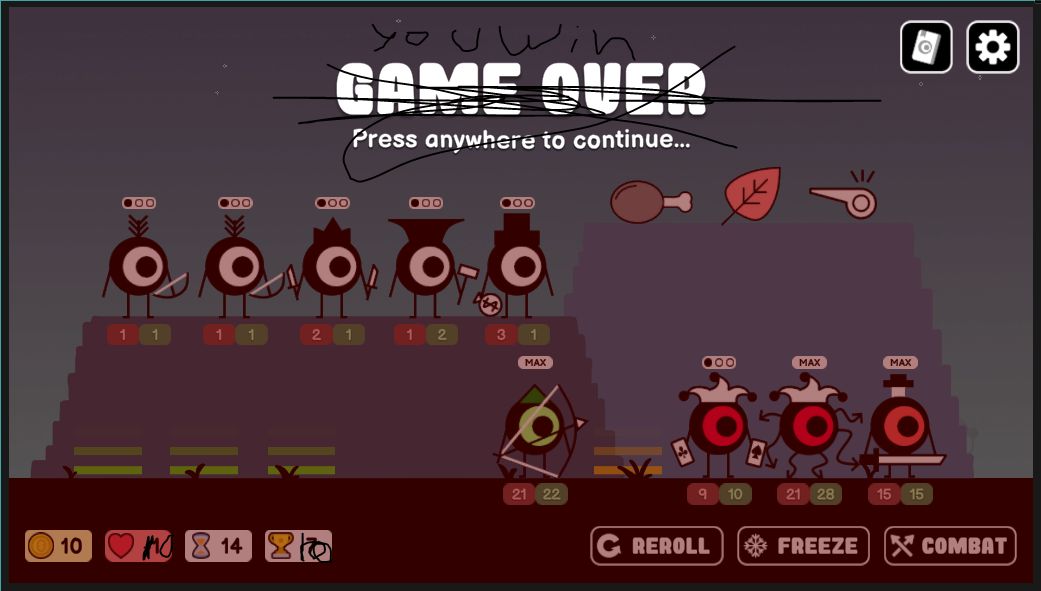 How do you freeze? I've tried to drag the rage leaf to the freeze button, press freeze then try to press the thing I want frozen, but It won't work.

That's not how the freeze function works you just click on it to save the current shop items in place so that they don't get rotated out in the next round.

It will have a new (longer) mode that everyone has been asking about!

Awesome game, I think it would be cool to add an endless mode to test comps to the limit

The monster is super op

ye there is also a lot of others that are op

A Good Self Scaling Unit

Can Get A Pizza And Magic Hat + Shield Stack

Giving This One Damage Counts As Two

good until you lose ur entire team

Lol this is the characters from the game patapon 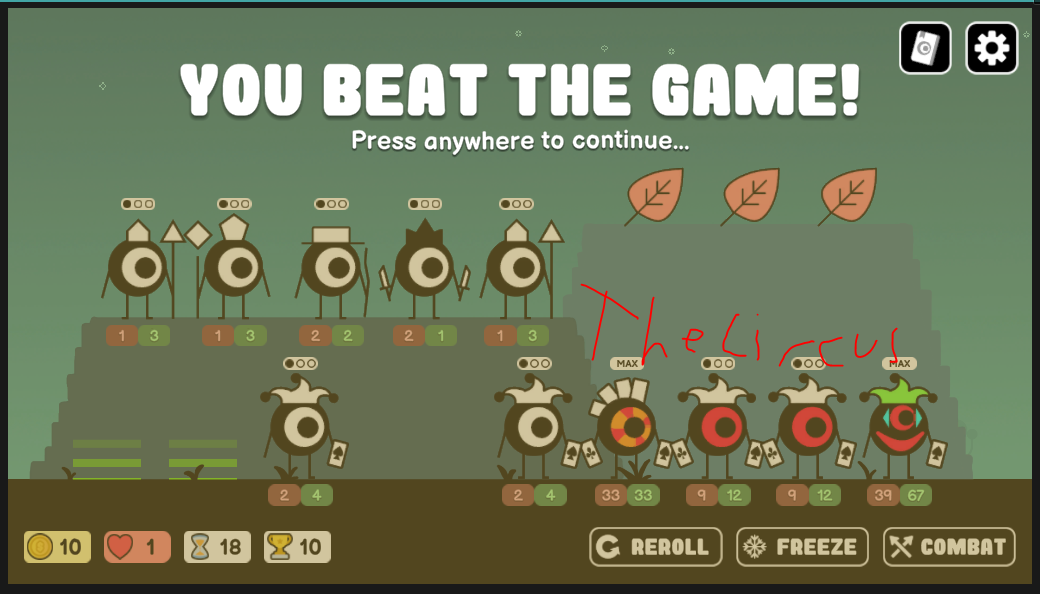 Really easy to win in my opinion and this is coming from a guy who can't barely get 9 wins in super auto pets. I think you should add a expert bot difficulty or a player ranked mode

I make it harder by trying to complete the unit-pedia

ideas for any updates

-Achievements (ex. win without tier 3 units, win with only one type of unit, complete all of a units evolution tree, etc.)

Z Tier = Reserved For The Worst Of The Worst (no spoilers)

Tier 2 Tier List (the ones you get for combining tier 1 units (the ones from the shop) :

its a good gear scaling unit

i dont buy gear until like turn 13? so this would be a A Tier if it would stop buffing itself or other buffing units in the barracks (pls im losing)

i wouldve put this on b tier if it worked with overprepped, ratman, and hoarder

on enemy's team: lolol i will put youre long bow man on front and then i will destroy ur team

on my team: i will switch the 4th unit with the 5th unit (both of them are the same unit)

its tier 3 paths are gud and it itself is goood

I Have Two Ways Of Reworking This Unit

1. Gives Each Unit A Random Gear Depending On Your Current Max Tier Of Gear

One Man Army = B Tier

Round Warrior = B Tier

has a friend healer

Has anyone won using Overprepped? He's just too weak

yes with couponer it is possible but donkey doesn't work with it :(

It's hard to get both couponer and overprepped. Have you actually tried it?

yes plus a banker

Unaffected By The Fool, The Reverser, And The Jester

If You Picked The Right Unit You Can Win 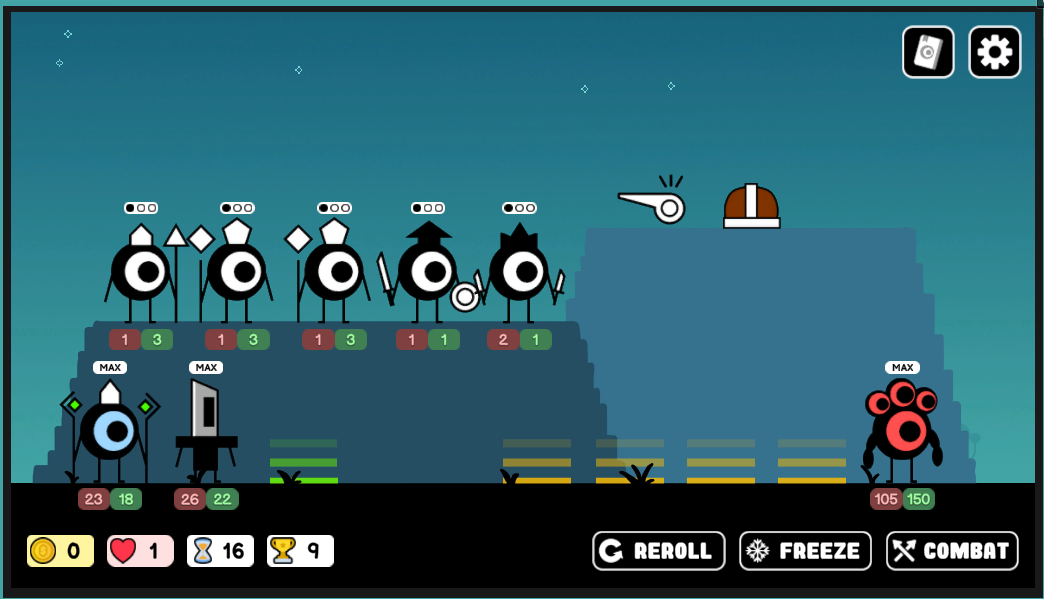 I'd say Solo Buffing works better with the Ogre or Sprinkler, as the Monster lacks the reliability to handle full teams especially when you first get it 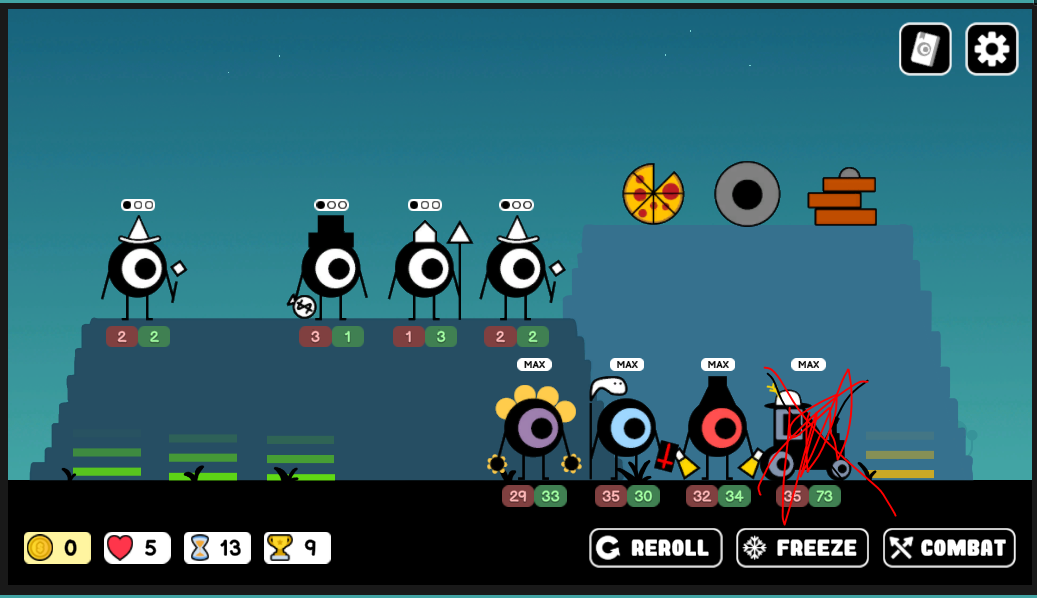 Z Tier = Reserved For The Worst Of The Worst (no spoilers)

Base Unit Tier List (the ones from the shop)

Knife Thrower is too weak, it should not have the disadvantage of taking 1000 damage.

It's a single attack, so even if it has high health, it won't be that strong

? i thought you said to remove the disadvantage of taking 1000 damage if it was removed and it has high health to almost survive any attack then it could delete all teams (as well of many other tier 3 units but that's besides the point)

What I'm saying is that even if the disadvantage is removed from Knife Thrower, it will not be overpowered

... wut? It does 1000 extra damage and then dies you are basically saying to remove the part where the unit dies

https://docs.google.com/spreadsheets/d/1b5DbnsFeXgtlbQndqiFeLaxsDbtQIH2jkXDI3P06... someone posted this in the discord

Will there eventually be a PC downloadable release so there won't be unitpedia  and history loss? Or is that currently todo later and the fix will encompass the web version too? (Although I don't like relying on cookies either, but I don't know how itch.io games save online progress so the data may not be as volatile as I think)

Ideally, both! We're aiming to have a Windows downloadable version, as well as Accounts to prevent the Unitpedia being wiped in a future update! 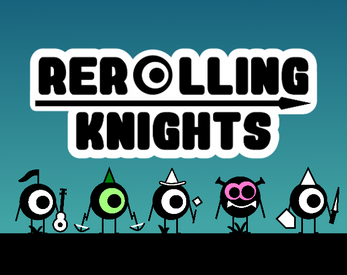